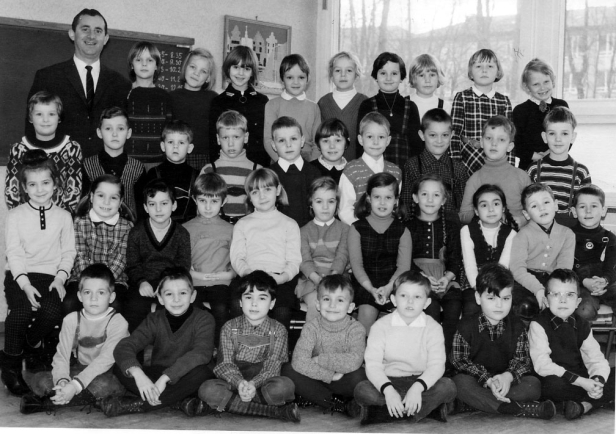 The day I turned six, my Mom didn’t know it was my birthday. She found out from a man we’d just met. It’s my most special birthday memory.

That bright September day, Mom led my brother and me through the park to our new school. Carefully tended flowerbeds and manicured lawns, woven together by curving gravel paths, surrounded the King’s castle in Karlsruhe. The formal part of the Schlossgarten was protected from the randomness of children by ankle-high fences and little signs warning us off the grass. This walk would be where I learned most of my German. My best language lessons happened on the way to Habelschule, walking with my classmates as they attached words to the things around us: Blumen, Vogel, Schmetterling…

Holding hands on either side of our Mom, my brother Bobby and I caught the attention of locals who were out strolling on that Fall morning. We provoked smiles and even got pats on the head as grownups greeted two blond, blue-eyed, porcelain-skinned children. Mom said we resembled the Hummel figurines she collected on the windowsill.

At school we were ushered into the principal’s office to register for first grade. Bobby and I were to be in the same class despite our one-year age difference. A couple other kids from Gastdozentenhaus, the apartments for visiting professors, were also enrolled in Habelschule. Our teacher would be Herr Halle. We were being placed with him because of his superior English skills. We were more impressed by his ability to balance a pointer stick on his ridiculously long nose.

The principal was kind and efficient. He helped Mom fill out the paperwork she couldn’t read. Mom always said she was only able to speak Kauf-Deutsch (shopping German). During our sabbatical year, she had limited opportunities to learn the language, playing the role of professor’s wife and mother. When she wrote my birth date into the space on the form, the principal bent down and wished me a happy birthday. Mom corrected him, “No, tomorrow’s her birthday.” Pointing to the calendar on his wall, the German indicated that today was, in fact, the day.

With a rush of clarity, Mom realized what had happened. During our long journey across the Atlantic on the Kungsholm, followed by travels through Scandinavia, we’d lost a day. With a smile, the principal pulled the yellow daffodils from the vase on his desk and wrapped them in paper. He laid the bouquet in my arms and again wished me a happy birthday.

I hugged the fresh flowers to my coat and we made our way back through the Schlossgarten. I was glowing. Mom was frantic. She was going to have to pull together a birthday celebration in a few hours when she thought she had twenty-four.

The people in the park greeted us with smiles and birthday wishes: Herzlichen Glückwunsch! How did they know? An older man wearing a dark overcoat bent down and spoke to me directly. I’d learned a little German for the trip, but not enough to compose a response.

“You are American?” asked the gentleman. He turned back to me. “Is today your birthday?”

“Yes.” Everybody seemed to be in on the secret.

He reached into his pocket and pulled out two wrapped candies, giving one to my brother and one to me. We popped them into our mouths simultaneously, but when we bit down and tasted the liquor that spurt into our mouths, we exchanged grimaces and spit the candies back into the wrappers. Fortunately, the man in the wool coat had already gone on his way.

When we got back to the apartment, Mom dug through our still-packed luggage and found, bundled in some clothes, a thick vase from a Danish gift shop. I placed the daffodils on a table by the window and turned the vase around to show the slender deer etched in the glass.

That year in Germany and the trips we took through Europe are random snapshots of memory. We visited museums and monuments. Mom hoped we’d be awed by the cathedrals; we preferred to explore Medieval castles. I can still picture the Schlossgarten playground with its boats and suspension bridges; eating snails in France and sharing a pile of frog legs with my brother; cringing in the back seat of the car on narrow mountain roads; and being knocked off my feet by a huge wave in the Wellenbad. We would Spatsiergang through the Schwartzwald, the Black Forest, but wondered how adults could walk so incredibly slow. A story for another time is the ghost in the castle mirror that scared Bobby so terribly he lost his dinner all over the restaurant table, which made me secretly smile.

Recently, I asked Mom what we did for my sixth birthday after she discovered there was no time to plan a party. “I got you a cake,” she said. “I’m sure I got you a cake.”