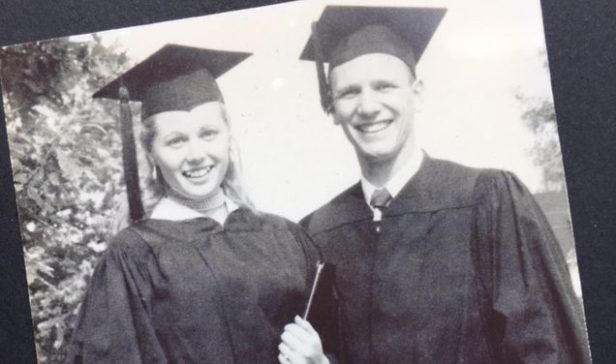 Translating oral storytelling to a written form isn’t simply a matter of recording and transcribing. Even practiced storytellers veer off on tangents and add asides that make a great verbal story difficult to read on paper. My job is to make the story an interesting read from “Once upon a time” all the way through to “happily ever after.” This job becomes more interesting when the story belongs to more than one person.

When documenting the story of a partnership or married couple, much can be revealed. For starters, it may quickly become apparent that there’s more than one truth. Rather than being a stumbling block, this adds depth to the story. There’s no need to try and figure out which memory is the “right” one. Showing both perspectives can reveal what’s important to each partner, and start some good conversations.

While many individual stories can be written in first person, with the subject as the narrator, writing in the third person is a great approach when two people are contributing. The result is a story that reads like a human interest feature article. The key is to liberally weave in dialogue. Here’s an example from the story leading up to Bob and Mary’s wedding day:

When summer was over, Bob and Mary agreed to drive home from Seattle non-stop.

“Staying at a motel now became a problem because our relationship was getting to be a bigger scandal with our parents,” said Bob.

“He asked me to marry him near the end of summer,” said Mary. “But he didn’t have a ring.”

“Yes. And Mary’s Mom made it clear it wasn’t an engagement without a ring,” Bob added.

By using dialogue, each partner can tell the part of the story they’re closest to. The dialogue also allows the story to unfold more naturally.

One thing that happens when interviewing two people at the same time is the most vocal participant will naturally dominate the conversation, shaping the story as they experienced it. In order to capture a balanced story, I will pause and ask open-ended questions of the quieter partner. For example, I might ask, “What were you doing at that time?” or say, “I’m interested in how you perceived the situation…” Allowing time for their perspective can lead to some interesting revelations.

After the first draft of the story is written, it’s important that both people have equal chance reviewing for edits. This is the best way to assure a balanced and satisfying telling of a life narrative.

The important thing is to end up with a narrative that reflects the personalities of both storytellers in order to create great memories for generations of readers.